On 24 October 2001 a terrible fire occurred in the Gotthard Tunnel, costing the lives of 11 people. The disaster was the trigger for a complete overhaul of tunnel safety and rescue concepts, which now focus on the deployment of firefighting and rescue trains (LRZ).

A cornerstone of the LRZ, and an aspect that can make all the difference between life and death, is a supply of highly purified breathing air for the firefighting and rescue teams and the evacuated passengers. The breathing air supply must be delivered independently of the environment of the train and must be one hundred per cent reliable, as the trains are in a contaminated environment when they are in the tunnel on firefighting missions. The entire breathing air technology installed by Dräger Safety in its LRZ trains is produced by BAUER KOMPRESSOREN. BAUER compressors are stationed on board all LRZ trains that engage in emergency operations. The trains currently in use are equipped with BAUER KAP 220 compressors with high free air delivery, combined with a BAUER P Series external breathing air purification system.

Depending on the location of operation for the LRZ, a compressor system is installed either on board the train or in the Emergency and Intervention Centres (EIZ) at the tunnel entrance. In the EIZs, breathing air is compressed on site and stored in giant racks of breathing-air tanks on the roof of the train. These racks can store an incredible two million litres of breathing air per train, to supply the officially specified numbers of 120 passengers, 16 crew and 20 firefighting personnel. The air is used to fill the breathing apparatus of the firefighting team and to create overpressure inside the train in an emergency situation, preventing smoke or contaminated air from entering the train from the outside.
The new Gotthard Base Tunnel, opened in mid-2016 and the longest railway tunnel in the world at a length of 57 kilometres, imposes the highest standards on the operation of the new rescue and evacuation concept in the event of fire in the tunnel. The Base Tunnel, the Lötschbergtunnel – which opened in 2007 – and the Ceneri Base Tunnel, in the Swiss canton of Ticino, together make up the NRLA (New Railway Link through the Alps).

If a passenger train catches fire in one of the tunnels, the LRZ rescue trains enter the unaffected parallel bore. According to the Swiss Federal Transport Office, they can reach the location of a fire within 45 minutes at the latest; on arrival, the firefighting teams access the location through cross-connections between the two tunnel bores to begin their work. A passenger train withdrawn from regular service is deployed to evacuate the passengers within the official safety target of 90 minutes after the outbreak of the fire. If the train on fire is a goods train, a different scenario is put into action: where possible, the burning train is pulled out of the tunnel so that the firefighting team can work in the open air. Latest-generation LRZ firefighting and rescue trains are designed to pull trains up to 750 metres in length and weighing up to 1600 (!) tonnes. 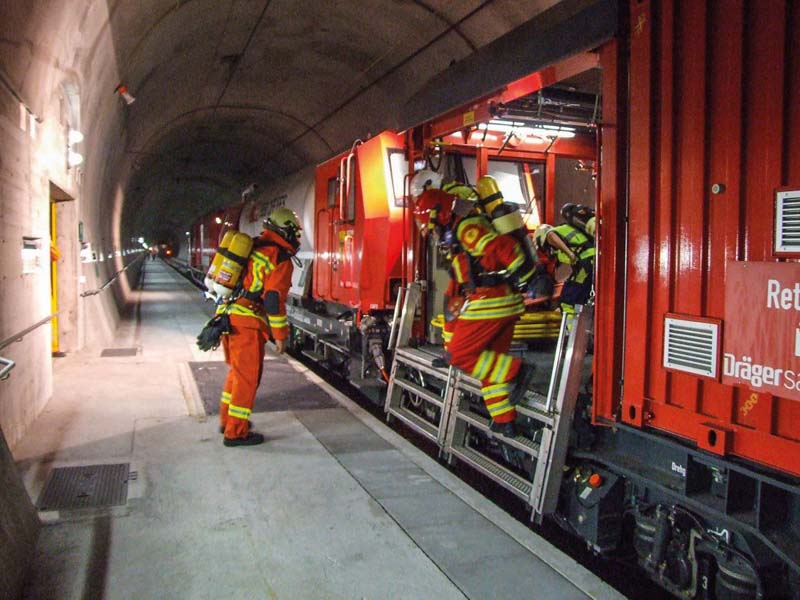 A Swiss firefighting team kitted out with full-scale breathing equipment puts the new tunnel rescue train to the test under real-life conditions. The air is supplied by a BAUER compressor system. 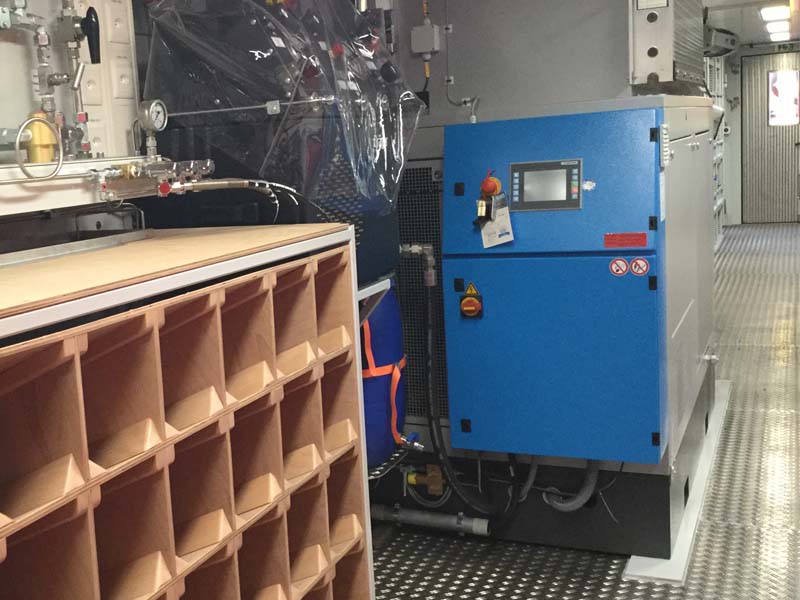